The biodynamic agriculture is the oldest method of biological agriculture. In 1924 Rudolf Steiner, who established antroposophy, held the so called Agricultural Course to an audience of farmers and large landowners. Without delay a great number of insights and recommendations were put into practice. The aim is to look after the soil as good as possible. Provided this basis is of good quality, crops that grow on it can truly nourish man. 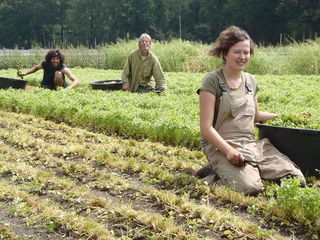 Another principle is to render a farm as complete as possible. This is done by cyclical processes, thereby restrictng the intake of fodder, manure and other basic materials to a minimum. The more mixed the farm, the more options to really make it a healthy one. Interaction with the surroundings has to be cared for as well, i.e. on and around the farm hedges, trees,ponds etc. are important to reach a harmony. In the course of years the farm so develops its own individuality, an interdependant organism bearing its own character.

Sofar the story has an ecological nature. The biodynamic story however goes further: thus the so called preparations (see elsewhere on this website) are of outstanding importance for the development of soil fertility but also to support the farm’s own character, as it were giving it a bear- hug. 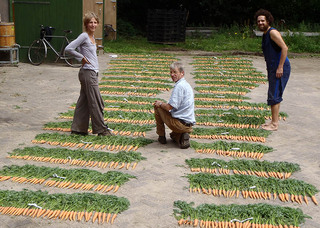 A starting point of biodynamic agriculture is that everything on earth is a manifestation of and is united with a (layered) spiritual reality. The same goes for the earth itself. It is the conviction that higher principles cannot originate from below, but the other way round. Creation is not a once only event, but a long evolutionary process which is now still in progress. In this sense that man has become co-creator of earthly realities. In agriculture this has the most literal meaning.

If it seems everything in the physical world stands apart, in the realm of life everything is connected with everything, forming one entity. This entity is to be seen on multiple levels, right unto the stars and planets. It is a challenge for the farmer or marketgardener to reach a living connection to this all and act accordingly.