F1-hybrid is a term used in agriculture. It means that a plant or animal is obtained by using a given method of breeding i.e. by combining inbreeding and interbreeding. Issue of this process is a crop or animal which grows evenly bringing a high yield and great uniformity. In itself however it cannot be reproduced effectively. In Dutch agricultural practice many hybrid varieties are being used.

The alternative to a (F1) hybrid variety is an open pollinated one: a variety that has originated from a classical way of breeding namely by interbreeding and selection. An open pollinated variety consists of specimens that carry more or less the same qualities as their parents. This is why on the continent we use the term 'samenfest' or 'zaadvast' (transl.: solidly established seed). The reproductive cycle can continue from generation to generation endlessly. This is not the case with a hybrid variety: this can have divergent qualities. This is why seeds of a F1 hybrid cannot be properly used in agricultural practice. By using the F1-hybrid the reproductive cycle is broken. 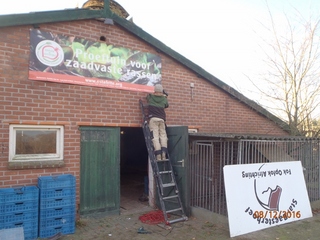 Hybrid varieties have not been around for a long time: they were mostly developed and have become popular in western agriculture in the 20th century, mainly after 1950. That’s why hybrid varieties were mainly selected aiming at intensive production with an input of chemical additives such as artificial manure, herbicides and insecticides. In the human history of agriculture open polllinated varieties have always been the basis. In areas of traditional agriculture they still are.

The advantage for farmers is that this hybrid offspring combine various good qualities and give higher yield. The homoginity of the qualities can be both an advantage and a disadvantage. In circumstances that are foreseeable and controllable homogenity has an advantage. But under changing circumstances however, homogenity is a weakness. In biological agriculture e.g. robust varieties carrying some measure of heterogenity are desirable. Hybrids are more vulnerable for changing circumstances, which means a risk in production.

Hybrid F1 seeds are often expensive, as they are developed by specialised seed enterprises. However for the farmer it is useless to obtain seeds of a F1 hybrid. The next generation has an unpredictable appearance and a varying quality to boot. For farmers a disadvantage is therefore that they cannot multiply seeds themselves. For the seed enterprises on the other hand this is an advantage: every year farmers are forced to again buy their seeds and so the breeding business can exploit its breeding rights much easier than with open pollinated seeds. 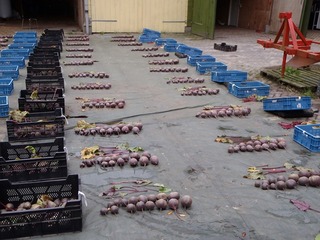 From abovesaid it will be clear that good reasons exist both botanical and socio-economical for not choosing hybrid varieties: