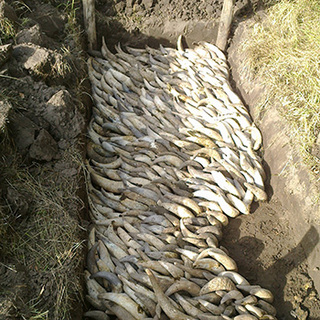 The use of preparations in biodynamic agricullture supports all lifeprocesses in surroundings far and wide and has beneficial effects on all realms of nature : elementary beings, plants, animals and humans.

The BD-preparations are compositions of partly herbal and partly animal origin. What nature cannot put together as a matter of course is now presented by man to the earth as something totally new , by rendering cowdung, rock-crystal (quarz,silica), and medicinal herbs in animal wrapping.

Rudolf Steiner in his Agricultural Course (1924) points at the very special effect of the preparations. By this special concern and care in agriculture soil and plants become more sensitive to cosmic influences. A more intense contact with the world of cosmic lifeforces, which brings about that a plant can realise itself more selfevidently according to its own archetype. The earth as it were comes closer to heaven.

Most preparations are made in autumn, after which is followed by a period of rest in the ground untill spring. Mountain-crystal (silica)is ground and put in cowhorns in summer. The stinging nettle-preparation (and the yarrow-preparation) are prepared during a whole yaer.